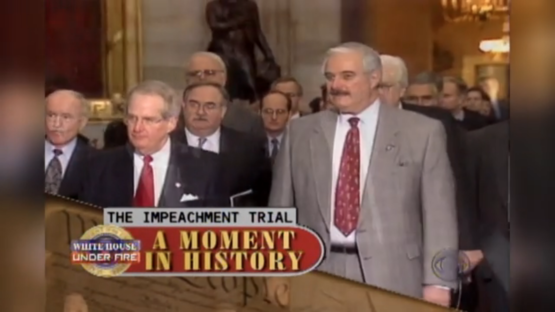 On December 19, 1998, the U.S. House of Representatives voted to issue Articles of Impeachment against President Bill Clinton on charges of perjury and obstruction of justice. The second impeachment trial of a U.S. president (the first one was with Andrew Johnson in 1868) resulted in an acquittal of all charges by the Senate on February 12, 1999.

The trial was rooted in a conflation of two separate investigations. In the first one, Independent Counsel Kenneth Starr had been investigating Clinton’s pre-presidential financial dealings, but found no evidence of wrongdoing. In a separate case, Paula Jones sued Bill Clinton for sexual harassment, and she reached out to Monica Lewinsky. Starting in November 1995, the twenty-one-year-old intern had an affair with the president for a year and a half. Lewinsky had confided in a coworker Linda Tripp, who secretly recorded their conversations.

Paula Jones’s lawyer subpoenaed Lewinsky, who first filed an affidavit in January 1998 in which she denied ever having had a sexual relationship with Clinton. In his own deposition, Clinton denied under oath any involvement with Lewinsky. As the story became news, Clinton addressed the matter, famously stating on January 26, 1998, that he did not have sex with Lewsinky. Tripp brought the recorded tapes and other evidence to Kenneth Starr, who now suspected the president to have lied under oath about his relationship with Lewinsky, thus committing perjury and obstructing justice. Starr assembled a grand jury, issued dozens of subpoenas, and eventually offered Lewinsky immunity in return for her testimony. In July 1998, she finally admitted that she had lied and testified that she had had sexual encounters with Clinton. The president gave evasive answers when he testified for Starr’s grand jury on August 17, 1998, but admitted that same night to the Lewinsky affair in a statement to the American people, apologizing to his family.

In his report presented to the House Judiciary Committee on September 11, 1998, Starr stated that he had proof of eleven impeachable offenses. After nearly fourteen hours of debate, the House of Representatives only approved two articles of impeachment, charging President Clinton with lying under oath to a federal grand jury and obstructing justice in the Jones investigation. The president’s own lawyers, on the other hand, said his behavior was “morally reprehensible,” but not impeachable, and that the accusations against the president did not “meet the constitutional standard to remove the president from office.”

The House of Representatives voted to issue Articles of Impeachment against Clinton almost totally along party lines on December 19, 1998, and Clinton vowed to continue working. It was followed by a twenty-one-day-trial in the Senate, where a two-thirds majority of votes was necessary for conviction. In the end, Clinton was acquitted of all charges on February 12, 1999. He was, however, held in civil contempt of court by Judge Susan Webber Wright for giving misleading testimony in the Paula Jones case regarding Lewinsky and was also fined $90,000 by Wright. His license to practice law was suspended in Arkansas for five years; shortly thereafter, he was disbarred from presenting cases in front of the United States Supreme Court.

ABC News and the Washington Post first broke the story in January 1998, and PBS was the first to get an interview with the embattled president. CBS's coverage was praised by television critics such as Tom Shales, who described in the Washington Post how “CBS has done the best job of keeping some dignity” and that “they are trying to exert as much caution as possible, even though they are caught in this raging river of rumors, innuendo and allegations.” CNN, a twenty-four-hour news network, saw its ratings jump by 57 percent.

As the affair “evolved at a dizzying pace,” the Big Three networks called their correspondents back from Cuba, where they were covering the Pope John Paul II’s historic visit. The focus then turned to the affair and the allegations of sexual harassment, which tainted the coverage of all things political, including the State of the Union. Walter Goodman in the New York Times counted the number of stories about Monica Lewinsky—124 by February 3, 1998, not counting the nonstop coverage by CNN. He bemoaned how most of these stories had been informed by, if not relying on “allegations, rumors, opinions, surmises, leaks, spins, slaverings and commercials.” Tom Shales complained about how the coverage by reputable television news had fallen to the level of tabloids, relying on the Drudge Report for example. It was, unfortunately, a familiar patter: “here we are again at rock bottom. Looks familiar down here, doesn’t it?  Someday we may find there’s no crawling out again.”

By February 1998, the Washington Post reported that the public was fed up with the media’s constant coverage of, if not obsession with, the affair. Similar to what had happened during the O. J. Simpson case, Americans devoured the incessant coverage, which they denounced at the same time. While ABC News anchor Peter Jennings considered the story to be “an important political-social-ethical story,” Dan Rather on the other hand expressed his unhappiness, “I didn’t get into journalism, to chase sex stories.” “If the story didn’t have any important aspects,” he told the Washington Post, “I would have walked away from it a long time ago.”

Political pundits and commentators were very critical of the president’s television admission of his affair with Monica Lewinsky on August 17, 1998, after he testified in front a grand jury; a reaction that seemed highly hypocritical to many. Dan Trigoboff explained in Broadcasting and Cable how “the president’s four-minute address was followed, predictably, by hours of analysis on virtually all the networks.” The press in turn, was very critical of the televisions news coverage of the entire affair, with Howard Rosenberg in the Los Angeles Times comparing news programs to vampires, Tom Shales in the Washington Post mentioning the “chorus of rantings, ravings and wild speculations” that preceded the speech, and Frank Rich in the New York Times labeled the tone of the coverage “orgiastic.” For Todd Gitlin in the Washington Monthly “the press made a scandal of itself.”

Nothing changed. News agencies were on alert in December 1998, waiting to cover the impeachment hearing, and to capture, and comment on, the president’s remarks on December 20, after he was impeached. While CNN opted for a split screen to cover both the debate in the House and the bombing of Baghdad, CBS went to a football game, the only network not to cover the hearing. The "sense of history and decorum did not last long," and Dan Rather then announced the vote of impeachment on the bottom of the screen during the football game. It was the most drastic example of a corporate decision to value entertainment and paid sponsors over journalistic ethics.

In an interview when promoting his book Deadlines and Datelines, Rather talked about the coverage of the Clinton-Lewinsky story, stating that the news media, especially television news, "diminished the standard of journalism." He wrote in the book, "already clear that the press won few admirers in recent months, we depended on rumors and innuendos, reported as facts information that was suspect or inadequately confirmed, and in far too many cases, wallowed in the lurid atmosphere. We might have risen to our responsibility, acted as models of decorum, helped out fellow citizens during a time of confusion and crises but we seldom did." 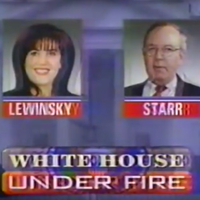 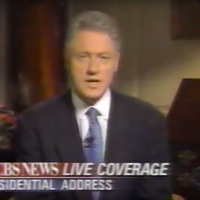 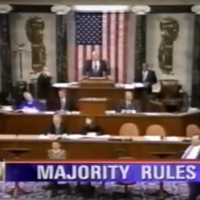 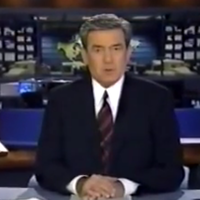 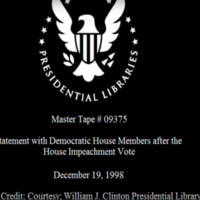 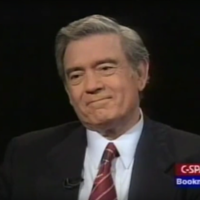 Video - Rather on Impeachment Coverage 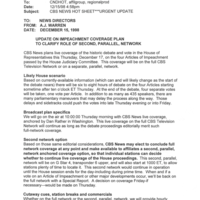 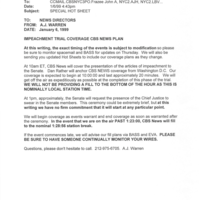 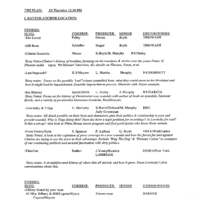