Take the Children and Run 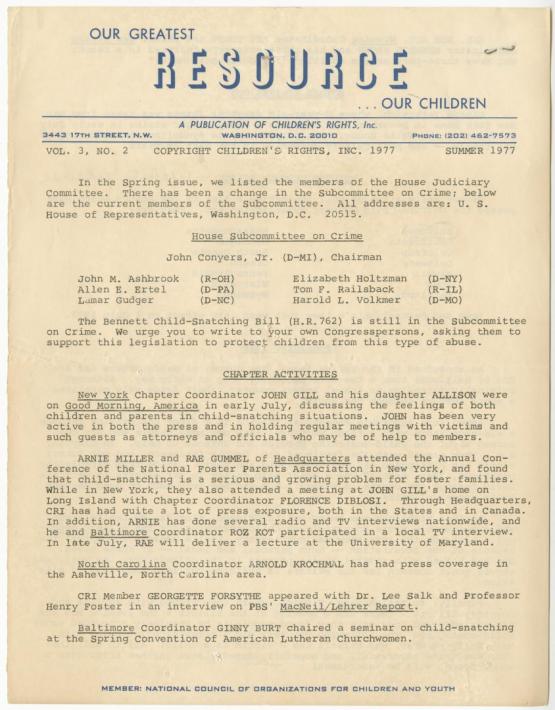 This September 26, 1976, show looked at divorced parents who kidnap their own children from their ex-spouses. Like many other 60 Minutes pieces, this story was inspired in part by a viewer who wrote and called CBS in January 1976. Producer Marion Goldin looked into the issue and submitted a “bluesheet," a story proposal on May 11, 1976, noting that “the law is a mess. The human emotions are enormous.” She quickly went to work, contacting parents of missing children, private investigators involved in such cases, and Assistant Attorney General Richard Thornburgh to get the human and the judicial points of view. After extensive research, the 60 Minutes team decided to focus on four cases, involving both mothers and fathers of missing children. They followed the work of a private detective who specialized in “snatching” children to bring them back to the parent from whom they had been separated. The reasons many parents resorted to such methods was because the laws were confusing and uneven across different states. In an interview with Dan Rather, Richard Thornburgh explained that the Justice Department was opposed to making kidnapping your own child a federal crime.

Like other 60 Minutes shows, this story had concrete impact: in 1980, forty states passed the Uniform Child Custody Jurisdiction Act. In addition, the Senate passed the Wallop Amendment to Title 18 of the Criminal Code, making child snatching a misdemeanor and ordering that the Department of Health, Education and Welfare's parent locator service be used to locate child snatchers.

It was one of producer Marion Goldin’s favorites not only because it was an important topic but also because it made for great television, even if, like other 60 Minutes pieces, the ethical lines were a little blurred. As Goldin explains "We’re not an arm of the law, and we’re not immune from loving a good story."