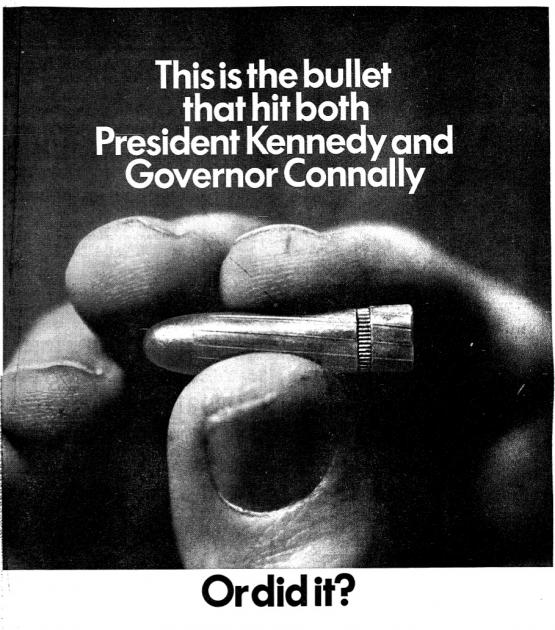 Advertisement for "CBS Inquiry: The Warren Report," in the Washington Post, June 25, 1967.

The idea of doing a long-format show about the Warren Report had been discussed between producer Leslie Midgley, CBS News division president Richard Salant, and reporter Daniel Schorr. The original idea was to put the Warren Report on trial, but the project evolved over several months into its final format.

As reported by Broadcasting, “a special unit, under executive producer Leslie Midgley spent nine months, shot more than 90,000 feet of film and covered nearly 250,000 miles during its investigation.” The team of reporters included Walter Cronkite, Dan Rather, Eric Sevareid, Mike Wallace, Bill Stout, and Eddie Barker, news director of KRLD-TV, Dallas-Fort Worth. The show explored three central themes: Did Lee Harvey Oswald act alone? Was there a conspiracy? Why is there so much skepticism over the Warren Report? To answer these questions, the team reviewed the Warren Commission’s findings about events before, during, and after the assassination of President Kennedy and the murder of Lee Harvey Oswald. The show examined each point of criticism and contained filmed interviews, reconstructions of events, and experiments conducted in many parts of the country.

The first hour examined whether Oswald owned the alleged murder rifle and how many shots were fired and looked at the Zapruder film and weapons test with a similar rifle. “Was There a Conspiracy?” on June 26 and June 27, examined the fatal shot’s origins and the single-bullet theory. It also featured an interview with James J. Humes, chief surgeon of the JFK autopsy, and a look at the role of Jack Ruby and Garrison’s conspiracy theory. The last hour, entitled “Why Doesn’t America Believe the Warren Report?” looked at the commission’s organization and procedures and interviewed members John J. McCloy and counsel Arlen Specter. It also reviewed Oswald’s rumored connection with the FBI and CIA. Produced by Leslie Midgley and Bernard Birnbaum and written by Vern Diamond, the show, which received an Emmy nomination, concluded that the Warren Commission's report was a fairly accurate account of the assassination.

The series was an enormous success, reaching more than 55 million U.S. homes, with an average rating for the four nights of 17.8, and more than 21 million people were estimated to have watched each night of the first two nights. The first and second nights had an average of 18.4 ratings and 39 shares. As with all shows dealing with the assassination of President Kennedy, it also received its fair share of letters disagreeing with the conclusion of the show.

The press was a bit more reserved, with Variety complaining the show was not unique, only routine coverage between soap, tobacco, and mouthwash spots, and bemoaning that CBS had not covered fresh turf. It praised, however, CBS’s tests and experiments but was disappointed by the conclusions drawn. The Los Angeles Times had similar complaints, noting that the apparent goal of the show—to assuage critics of the Warren Report—was not successful.