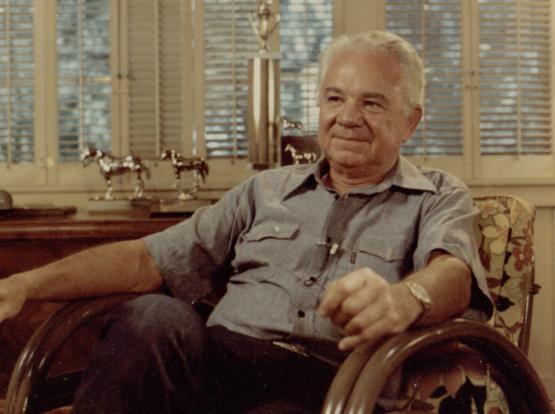 In August 1976, Dan Rather landed an exclusive interview with Watergate special prosecutor Leon Jaworksi. Producer Marion Goldin had suggested the story in July, following the publication of Jaworski’s memoir earlier that year. Her notes illustrate her extensive preparation—closely reading and annotating Jaworski’s book, leading preliminary conversations, brainstorming potential questions, and reading through transcripts from White House’s conversations. As she put it, “the [Nixon] tapes in all their glorious existence and ramifications remain one of the most fascinating aspects of the whole affair and are one of the best parts of Jaworski’s book and that’s where I think we ought to begin.” Other major questions were the last days of Nixon, including his resignation and pardon; Nixon as unindicted co-conspirator; plea-bargaining; and Gerald Ford.

In the comfort of the prosecutor’s home, the two Texans talked frankly, and Jaworski freely expressed his dismay at what he had discovered during his Watergate investigation. Producer Goldin recalls how "Leon Jaworski was truly appalled by what was uncovered in Watergate. He was a very, he was an establishment lawyer and an established power broker and I think those people were even more appalled than the rest of us at how power could corrupt. ...  And I think when it was all over, and that’s when we did the interview, he had things he wanted to say and the combination of 60 Minutes and Dan Rather had to be really, if not irresistible, a forum that he felt made lots of sense for what he wanted to do at that point." While he would not name names, Jaworski concurred that, in his opinion, either Mr. Nixon; Nixon’s personal secretary, Rosemary Woods; or the president’s personal aide, Steven Bull, had erased the infamous eighteen minutes of tapes.

Marion Goldin remembers how this story was right in Dan’s repertoire as it focused on politics—"his adrenaline gets going more with politicians and people in power, particularly people in power doing unacceptable things." In 1979, Rather interviewed Watergate Judge John Jospeh Sirica.

CBS heavily promoted the interview, using the following advertisement: "Was there a deal between Nixon and Ford for a pardon? Watergate prosecutor Leon Jaworski has the answer on 60 MINUTES … Sunday at 7/6 Central Time on CBS." This led to an objection by President Ford’s press secretary, Ron Nessen, who complained that the teaser was misleading. Arthur Taylor of CBS News answered that anyone who watched the interview came away more convinced than before that there was no deal.