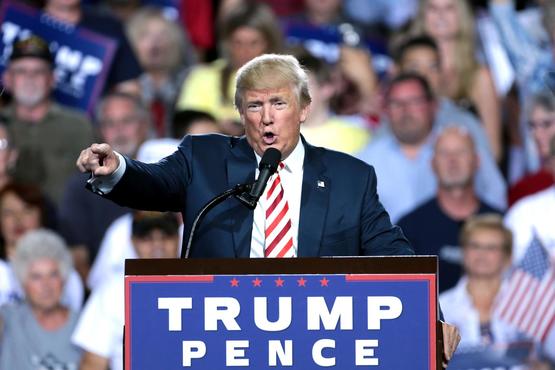 After an acrimonious campaign, the populist Donald Trump, who ran as a Republican, lost the popular vote to Democrat Hillary Clinton by more than 2.8 million votes on November 8, 2016. However, he won thirty states and a decisive electoral college with 304 electoral votes to Clinton’s 227 and thus became the forty-fifth president of the United States. The unexpected victory of an outsider with no political job experience was a stunning upset and marked a dramatic shift in American politics.

As the primary started in 2015, the GOP was in strong position as many voters were unhappy with the slow recovery after the 2008 economic meltdown and with the Patient Protection and Affordable Care Act, or “Obamacare.” In the largest presidential primary field for any political party in American history, seventeen major candidates entered the race. By September 2015, the field stabilized around the following six candidates: Texas Senator Ted Cruz, Governor Jeb Bush of Florida, retired neurosurgeon Ben Carson of Florida, businesswoman Carly Fiorina of Virginia, Governor John Kasich of Ohio, Senator Marco Rubio of Florida, and businessman Donald Trump of New York.

Mired in insults and invective, the Trump campaign incited violence at its rallies, and the candidate insulted Mexican immigrants, called for a ban in Muslim immigration, and displayed outright sexism and misogyny. His abrasive tactics and repeated insults of the national news media (whom he called “among the most dishonest people that I’ve ever met”) led to press opposition and the building of a “Never Trumper” coalition. In July 2017, the Republican National Convention in Cleveland was characterized by lackluster staging and signs of disunity: prominent Republicans did not attend, Ted Cruz refused to endorse Trump, and Melania Trump was accused of plagiarizing part of her speech from Michelle Obama. Donald Trump nevertheless won the nomination of the Republican Party and selected Indiana Governor Mike Pence as his running mate.

On the Democratic side, Hillary Clinton, a former senator and secretary of state for four years under Obama, enjoyed the early support of the Democratic establishment. She faced, however, a surprising challenge from Bernie Sanders. A self-proclaimed Democratic Socialist, the Independent Vermont senator developed a strong grassroots organization and energized young voters. Both candidates won a number of primaries and caucuses and Sanders, who stayed in the race until the convention, pushed Clinton to adopt more progressive policies. By the end of the primaries and caucuses, Clinton won 2,204 pledged delegates (54 percent of the total), while Sanders had won 1,847 (46 percent). Clinton also received endorsements from 560 (78 percent), while Sanders received 47 (7 percent) out of the 714 unpledged delegates or "superdelegates" who were set to vote at the convention in July.

The 2016 campaign was one of the most negative ones in the history of U.S. elections with the least popular candidates in recent history, with personal disapproval ratings on election day of 54 percent for Clinton and 61 percent for Trump. In addition to the Muslim family of a fallen soldier, Trump attacked a judge, a Miss Universe, and a Fox News anchor. He refused to release his tax returns and to answer questions surrounding his charitable foundation. The Republican candidate took right-wing populist positions and used “Make American Great Again” as his campaign slogan. In a 2005 video released on October 7, 2016, Trump was heard making lewd comments about women. More than a dozen women came forward and accused him of sexual assault.

Hillary Clinton had her share of issues during the campaign. She was castigated as condescending after telling a fundraising audience, “You know, just to be grossly generalistic, you could put half of Trump's supporters into what I call a basket of deplorables. . . . Racist, sexist, homophobic, xenophobic, Islamophobic, you name it.” Her collapse (due to illness) when she left a September 11 memorial in New York was used by Trump to demonstrate that she was not fit to be president. In addition to the emails leaked in July 2016, nearly fifty thousand e-mails from the account of John Podesta, Clinton’s campaign manager, were leaked in October. Most damaging to Clinton’s campaign was the longstanding controversy over her use of a private email server while secretary of state. The FBI investigation resulted in FBI Director James Comey declaring that while Clinton had been “extremely careless” in her handling of national security information, he lacked proof of any criminal intent by Clinton or her team. Eleven days before the election, Comey wrote a letter to Congress announcing that the FBI was reopening the server matter after having found new, “pertinent,” e-mails. They came from a laptop belonging to the estranged husband of one of Clinton's closest advisers, Huma Abedin, as police investigated whether he sent explicit text messages to a fifteen-year-old girl. Two days before election day, James Comey said it had found no evidence of criminality in the emails and again closed the case. Although it is hard to quantify the impact of Comey’s letter, polls shows that Clinton’s six-point lead over Trump eroded to just three after the episode.

While Clinton had a better funded and organized campaign, Trump’s anti-Washington establishment, anti-immigration, anti-globalization message appealed to white working class in key states and played a major role in his victory. In addition, Clinton supporters blamed Comey, Russian computer hacking, “fake news,” and the undemocratic nature of the electoral college for her defeat. Seventeen heads of U.S. intelligence agencies agreed that Russia had engaged in a systematic effort to influence the election in Trump’s favor, including the hacking incidents and the dissemination of “fake news.” The revelations prompted demands for an investigation by the new Congress in 2017.

Rather's Coverage of the 2016 Election

When campaign 2016 started, Rather made few uses of his Facebook account, with less than a million followers, announcing upcoming interviews or relinking newspaper articles he found interesting. Following the advice of his longtime producers Elliot Kirschner and Wayne Nelson, Rather decided to write what was on his mind about this unusual election year. While the advice was to limit himself to two paragraphs or less, or people will run away and never come back, Rather knew he needed a bit more space.

With five hundred words or more, his postings took a more personal tone, where he shared his passion for politics, laid out his worries and hopes about the future of the country and the state of the journalism which he saw under attack. He drew on his sixty years of experience as a reporter, providing context and points of reference to what was happening. As people struggled to make sense of this vitriolic campaign, they turned to Rather, who, unbound by any networks or commercial commitments, was (finally) able to speak his mind.

Covering the primaries, he analyzed the debates and talked about the "chasm between the base and the establishment" of both the GOP and the Democratic Party. He was revolted by how Trump encouraged violence during his rallies and his "fusillade against the press," a topic he came back to again and again. In an unprecedented move, the Republican candidate denied or revoked press credentials from several outlets, including the Washington Post, the Huffington Post, Politico, BuzzFeed, the Daily Beast, the Des Moines Register, the New Hampshire Union Leader, Univision, and NPR, setting a dangerous precedent. Rather reported live from both conventions, celebrating sixty years of convention coverage, and pondered already in July 2016 if Trump was psychologically fit to be president. Rather correctly recognized that Trump's ability to dominate almost every news cycle gave him the edge in the election.

Most importantly, Rather warned about the dangerous rhetoric Trump used and the amount of falsehoods and lies he uttered. Although he regularly criticized the media for not doing a proper job of focusing on the issues, Rather remained a staunch defender of journalists, especially in light of Trump's attacks. As he repeated several times, freedom of the press is enshrined in the Bill of Rights, and the press plays a vital role in democracy, keeping politicians in check.

At eighty-five years old, Rather enjoyed a new notoriety and was invited to CNN and MSNBC. The Daily Beast called him “the only good newsman on Facebook.” He continues to report and comment on the Trump administration and the affairs of the country. In the summer of 2017, Rather's Facebook account reached 2.5 million followers.