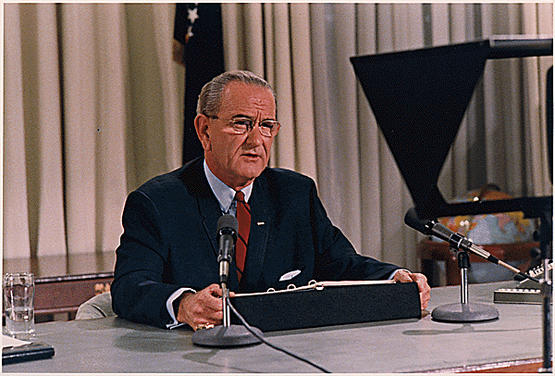 While both men were from Texas, Dan Rather did not meet Lyndon Johnson personally until 1955. The reporter had covered the political career of senator and then senate majority leader Johnson in the 1950s. As a cub reporter working for KTRH in Houston, Rather convinced his boss to let him attend a press conference Johnson had scheduled at his Austin-area ranch after his coronary surgery. As Rather recalled in his autobiography, this first meeting did not go well, and Rather experienced firsthand Johnson's irascible side. The reporter did not get another glimpse of Johnson until 1960, then briefly at the Democratic convention, and only at distance in the motorcade in Dallas on November 22, 1963.

Hoping that shared Texas roots would facilitate access, CBS assigned Dan Rather as White House correspondent on January 1964. Without any sources in a new city, the first year did not go as expected for the young journalist. He struggled to find his footing, and Johnson did not make it easy for him. At the end of a mildly successful year, Rather was sent to London to gain experience as a foreign correspondent. He later went to Vietnam and returned to Washington in 1966 to resume his post as White House correspondent. The journalist did better in his second term, learning to get to know the different press secretaries, who under Johnson were Pierre Salinger, George Reedy, Bill Moyers, and George Christian. As Rather recalled, he had an awkward relationship with Johnson who “was all Texas, and because I was a fellow Texan, Johnson always believed that entitled him to a free pass. It was a sore subject throughout his presidency. He seemed to expect some sort of Lone Star dispensation. That, of course, was something I just could not give.”

Covering the Johnson presidency through 1968, Rather reported on everything from the appointment of George Christian as White House press secretary to efforts to pass a tax bill, from the wedding of Lynda Johnson to the role of Walter Rostow. As the war in Vietnam intensified, Rather focused a lot on the Johnson administration’s efforts in Southeast Asia. He detailed, for example, the so-called Tuesday lunches or “Target Tuesday,” the meetings during which the president decided whether Vietnam would continue to be bombed, and if so, how much and where. His sharp-toned reports prompted numerous calls from President Johnson, who bluntly asked him "Rather, are you trying to fuck me?"

As a member of the White House press corps, Rather also accompanied the president across the globe. Fellow journalist Muriel Robbin recalled how Johnson loved to go to funerals and how he decided to go to the funeral of Australian Prime Minister Harold Holt: “On the way to Australia, we discovered that Dan Rather, then the CBS White House correspondent, liked to sleep under the seat. He negotiated with sitting occupants not to put their feet on his face, then wrapped himself mummy-like in a blanket and stretched out below three rows of seats. It was unnerving until you got used to the idea, and what was most exasperating about it was that he would emerge without a hair out of place or a wrinkle on his shirt.” 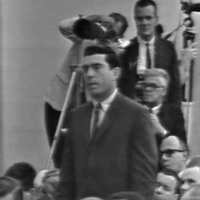