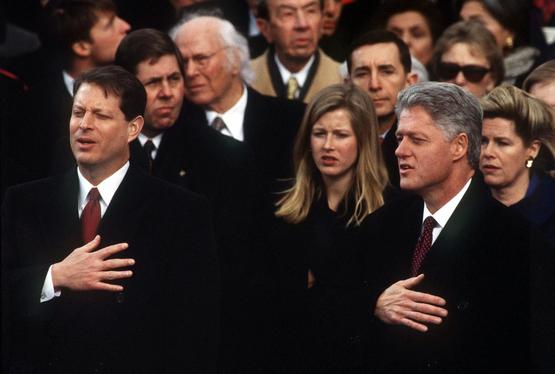 On November 5, 1996, Democrat Bill Clinton was elected to a second term, defeating Republican Bob Dole, a former U.S. senator from Kansas and Republican leader of the United State Senate.

As a sitting president, Clinton was easily nominated as the Democratic candidate during the Democratic National Convention, which took place in Chicago, Illinois, between August 26 and 29, 1996. The field was crowded on the Republican side with Bob Dole, conservative commentator Pat Buchanan, businessman Steve Forbes, former Tennessee governor and U.S. secretary of education Lamar Alexander, and conservative commentator and former diplomat Alan Keyes. Dole eventually prevailed and captured the Republican nomination. He resigned from the U.S. Senate to focus on his campaign and selected as his vice presidential running mate Jack Kemp, a former congressman from Buffalo, New York, who was highly regarded in conservative circles for his views on taxes.

Two years into his presidency, Clinton was somewhat struggling in terms of popularity because of his failed healthcare reform initiative, his federal assault weapon ban, and his proposal for allowing gay men and lesbians to serve openly in the military. While the “Don’t Ask, Don’t Tell” compromise was eventually secured, the president was considered by many pundits to be in a weak position. Under the leadership of House Speaker Newt Gingrich, however, Republicans in Congress had pursued policies in an uncompromising and confrontational manner, forcing two partial government shutdowns in 1995 and 1996 over funding for Medicare, education, the environment, and public health. During these tense times, Clinton’s moderate approach won him a lot of public support. Third parties included the Libertarian Party, the Natural Law Party, the U.S. Taxpayers' Party, and the Reform Party which nominated Ross Perot as its candidate. Unlike the 1992 campaign, the Texas businessman received less media attention and was excluded from the presidential debates. He nonetheless obtained substantial results for a third-party candidate by U.S. standards, with 8 percent of the popular vote.

With a recovering and increasingly strong economy and stable international affairs, Clinton kept his two-digit lead in the polls over Dole throughout the campaign. Democrats’ tactics during the campaign included associating Dole with the unpopular Newt Gingrich and blasting Dole’s proposed tax cuts at a time when progress was being made to cut the deficit. They also played on Dole’s age, a point that impacted some voters, especially after the seventy-three-year-old fell onstage at a campaign event and inadvertently referred to the "Brooklyn Dodgers," who had moved to Los Angeles three decades earlier.

In November, Clinton captured 49 percent to Dole’s 41 percent and Perot’s 8 percent. In the electoral college, Clinton won 379 votes to Dole’s 159. Despite Dole's defeat, the Republican Party was able to maintain a majority in both the House of Representatives and the Senate.

As audiences for convention coverage continued to dwindle, from 30 percent on the first night of the Republican convention in 1992 to 23 percent four years later, networks, as James Bennet explained in the New York Times, tried to reconcile several competing needs: “to resist becoming propagandists for the parties, to woo viewers with compelling images and to present a fair picture of the proceedings.” For their part, the GOP planned and executed a 1996 convention “scripted for television,” a four-day infomercial designed to showcase unity and harmony and looked away at any discord or dissent. Set in San Diego, California, from August 12 to 15, the convention was tightly choreographed. In addition to speeches by former presidents Gerald Ford and George H. W. Bush, the RNC staged a series of “emotionally charged moments that no amount of network commentary could neutralize.” Delegates and viewers saw a video tribute to Ronald Reagan, followed by an address by Nancy Reagan. In closing, retired general Colin Powell saluted Reagan’s oversized video image, electrifying the crowds.

The program inevitably led to friction as the networks strived to air only “newsworthy” footage from the convention and complained that they had been misled about the content of the Reagan video, which ABC and NBC decided to air and CBS decided against. They also objected to the fact that the party failed to give them advance copies of the speeches so they could be evaluated. All networks showed an hour of the convention, from 10 to 11 p.m. Eastern time, but, in that time, they only carried between thirty-five and forty-two minutes of the convention planners’ program itself—what took place on the podium. Instead, they interviewed delegates on the floor, including some like Pat Buchanan who had not been allowed to give a speech, talked about the use of technology, and commented on the very choreography of the convention. They pointed, for example, to the discrepancy between the diverse set of speakers on the podium and the overwhelmingly white and male delegates and conservative platform, and laid out the party's internal rift about abortion.

In the absence of real news ahead of the Democratic convention in Chicago, the media focused on the tumultuous 1968 Chicago convention, highlighting the dramatic differences with 1996. They also followed Clinton as he conducted a whistle-stop tour through the heartland abroad “The 21st Century Express,” the campaign slogan of the Democrats being “building a bridge to the 21st century.” The Democratic convention was as scripted as the Republican one, with Aretha Franklin singing the national anthem, Christopher Reeve giving an emotional speech, and the First Lady receiving roaring applause. Only on C-SPAN could viewers see the speeches of Jesse Jackson and Mario Cuomo, which were scheduled in the afternoon, as the networks limited themselves to one hour live in the evening. As schedule changed slightly, networks who covered the events live felt trapped, unable, for example, to cut away from the president for fear of being seen as disrespectful. Networks tried to adapt: CBS, for example, signed on a little earlier to allow time for background and context before Clinton’s speech and refused again to show the official “Clinton movie.” As the convention ended, pundits stated that the 1992 convention coverage was surely the last one of its kind and that the way networks cover campaigns and conventions was bound to change radically.

Two presidential debates were organized on October 6 and 16 between Bill Clinton and Bob Dole, while Al Gore and Jack Kemp faced off on October 9. The debates were without any surprises and were not as dull as expected, with Clinton clearly more at ease during the second debate, a “town meeting” with invited citizens. The debates were symptomatic of a lackluster campaign that Americans were not interested in. On election eve, polls showed Clinton leading Dole 55 to 37 percent.

Preparing for election night, the CBS News team invested in virtual set, 3-D graphics, and a touchscreen. Dan Rather was supposed to push a button on a touchscreen map of the United States while on the air, allowing him to display the latest election returns. In addition, the network posted continuously updated election returns on its World Wide Web site for the first time. Things went smoothly with just a few technological hiccups on election night. The touchscreen map did not always work, and election sites appeared swamped at night, but the new medium worked pretty well, passing something of a milestone. CNN got about 50 million hits, or requests, and CBS estimated it had 10 million hits. In order to beat the competition in calling races, network news operations employed their own statisticians and data analysts to study the results of exit polls provided by the Voter News Service. As was the case for the previous three elections, politicians complained that early predictions would discourage voters in the West. Dan Rather announced that Bill Clinton had been reelected at 9 p.m. Eastern time and continued to urge people to vote.

For the Washington Post, “CBS had the best and certainly the most elaborate graphics, including a three-dimensional 'reality room' for Harry Smith to bounce around in. CBS also had, it hardly needs to be said, the best anchor, the one and only Dan Rather.” The 1996 CBS election team included Ed Bradley, Mike Wallace, Paula Zahn, and Bob Schieffer.